San Francisco debutante Jessica Poole hasn’t seen her father “Pogo” Poole since the divorce between him and her mother Katharine, many years before. Pogo went off to travel the world and enjoy himself, while Katharine remarried to stodgy banker Jim Dougherty.
Now Jessica is about to marry Roger Henderson, a cattle rancher from the Valley of the Moon in Sonoma County, and Pogo has been invited to the wedding. Pogo arrives, as charming as he ever was. He is delighted by Jessica, and captivates her in return. He makes peace with Katharine, and even wins over Toy, the Doughertys’ prized cook, though not Jim and Roger.
But Pogo is still as irresponsible as before. He invites Jessica to come away with him and “see the world”. He even tries to break up her engagement, to Katharine’s dismay. He also seems to be coming between Jim and Katharine, who has never quite got over her love for him.
Despite Pogo’s maneuvers, the wedding goes through. But Pogo has reserved two airline tickets: who’s going with him? Katharine, fearing that Pogo has won over Jessica after all, rushes to the airport. Jim, seeing Katharine leave the reception, fears she is leaving him for Pogo, and goes after her. They meet at the airport, and see Pogo boarding a plane – with Toy.

This show premiered on Broadway on the 22nd of Oct. 1958 with Miss Skinner as the leading lady.
It was originally booked for a three-week run, but due to ticket demand the show was extended for an additional four weeks. 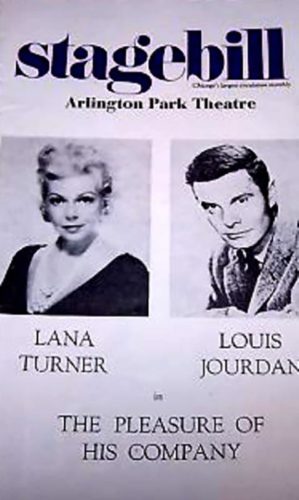 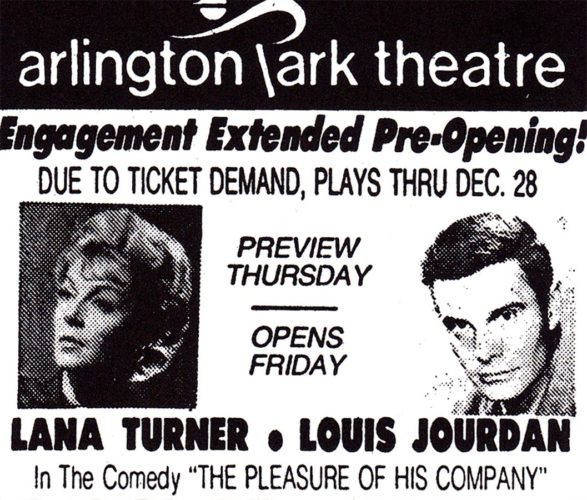 Review from the Daily Herald, Illinois from the 25th of Nov. 1975:
Despite nervous opening Turner’s out to please by Genie Campbell
It’s hard to say who was more nervous opening night last Friday at Arlington Park Theatre — the audience or the billed star. Theatergoers had the easier time of it fidgeting in their seats while speculating what Lana Turner would look like and how she would react in the well worn Samuel Taylor and Cornelia Otis Skinner comedy, “The Pleasure of His Company.” Lana on the other hand, had to prove herself and perform before an unblinking crowd of curiosity seekers. She did manage to do so, but not without the noticeable fear and apprehension of a misjudged, innocent bystander prodded to face a firing squad.
She came out on stage with a bad case of the heebie jeebies which fortunately gradually subsided as the play unfolded.  No doubt ticket holders going to Arlington in the following weeks, will see a much more poised, confident Lana Turner now that the longstanding actress realizes the audience isn’t going to attack, but rather sit back and smile.
The role of a matronly, wealthy, society-minded mother trying to launch her daughter off to a good “start on a well-to-do marriage, is much more suited to her present attributes than the sexy, movie queen image she portrayed for so long. Director John Bowab has done his job.
Turner’s costuming is, for the most part, appropriate and attractive. Nor are flamboyant, dramatic gestures employed to juice up her stage appearance outside of several crosslegged lounging Turner-style poses which do look contrived and would be better left out altogether.
Having been out of the limelight in recent years, it is a decided tribute to Lana that tickets immediately sold out for all performances last weekend. But it is not only Miss Turner but also co-star Louis Jourdan for whom the public clamors.
He has developed a large following in this area through his two previous engagements at Arlington Park Theatre.
And as in “V13 Rue de L’Amour,” his most recent show here, Louis is at his best playing the scamp, a devil-may- care, winsome guy who is obsessed with chasing beauty and danger around the world.
Impish, unpredictable, making the most of his precise French diction, the roguish Jourdan makes up for the play itself whose theme by today’s standards registers stale.
Playing the ex-husband who unexpectedly shows up to steal his daughter away, Jourdan expertly unloads those quips and uncompromising situations that still do work in “The Pleasure of His Company.”
Though it is by no means my first preference in theater, the comedy is “cute” and hence appealing to a wide audience.
And included in the lineup are other talented cast members who manage to roll with the punches.
Marilynn Scott actually does look and act like her father’s daughter and if she at times appears just a bit too naive and goody-goody, remember she’s playing the show in 90s style.
Sidney Breeze is the kindly, philosophical and wise grandfather who graces the stage with a great deal of candor and wit.
Don Marston wears his patience well as conservative husband number two, and Allan Hunt plays his part up as the-jilted cattle rancher who chooses to eat his meat plain and speak “bull” instead of French.
Finally there is Arsenic Trinidad who in brief appearances, epitomizes the saucy Chinese butler.
If you have a yen for the comfortable, “The Pleasure of His Company” will suit you just fine. Today’s best…