“The Sea Chase” is a 1955 World War II drama film starring John Wayne and Lana Turner.
Captain Karl Ehrlich (John Wayne) is the master of the elderly German steam freighter Ergenstrasse, docked at Sydney, Australia, on the eve of the Second World War.
Ehrlich is a former career naval officer who lost his rank and position after refusing to support the current Nazi regime.
As his ship prepares for sea (to avoid being interned if war is declared), he meets with an old friend, British Commander Jeff Napier (David Farrar), and Napier’s German fiancée Elsa Keller (Lana Turner).
Ehrlich knows Elsa has a dubious past and tries to break them up.
Germany has invaded Poland, and war is imminent.
As his ship prepares to slip away, Ehrlich receives a visit from the German Consul-General, who asks him to take aboard a spy who is facing capture. It is only after the Ergenstrasse slips out of harbour in thick fog that Ehrlich discovers the spy is in fact Elsa, who seduced Napier for the information she could learn.
She is cynically dismissive of Ehrlich’s old-fashioned personal integrity. Ehrlich’s chief officer, the pro-Nazi Kirchner (Lyle Bettger), who is also with German intelligence, soon makes a pass at Elsa, but she tells him to be patient.
Old, slow and short on coal, the Ergenstrasse is seen as easy prey by the Australian Navy and by Napier in particular, who understandably holds a grudge. But Napier is the only man who does not underestimate Ehrlich. The wily captain leads his enemies on a chase across the Pacific Ocean, beginning with a run to the south to throw off pursuit, and pausing for supplies at an unmanned rescue station on Auckland Island.
Three fishermen are already marooned there; Kirchner casually murders them, but tells no one.
Napier later discovers the bodies and believes his old friend is responsible. He vows to bring the German to justice as a war criminal.
Ehrlich sets course for a remote, uninhabited mid-Pacific island, Pom Pom Galli in the Tuamotus.
Running out of coal, he begins burning wood from the ship for fuel, upsetting the crew when he orders the lifeboats burned.
A potential mutiny is averted when they reach the island. There, Ehrlich drives the crew to cut trees for fuel, but impresses Elsa on several occasions by showing a humane side. Discovering that Kirchner murdered the fishermen, Ehrlich forces him to sign a true account of his actions in the ship’s log. Meanwhile, Napier convinces the Rockhampton’s captain that his old friend will make for Pom Pom Galli, which he spoke of visiting before.
They arrive just too late to catch him, first at Pom Pom Galli and then en route to Valparaíso in neutral Chile, where Napier cannot attack. While in port, Napier confronts Ehrlich about the murders; Ehrlich says that if they catch the Ergenstrasse they can read the truth in his log. Meanwhile Elsa learns the truth herself, dumps Kirchner, and declares her love for Ehrlich.
Luck is with the Ergenstrasse when the Rockhampton is called away to support the cruisers facing the German pocket battleship Graf Spee in Montevideo, Uruguay.
Napier requests a transfer to the British Naval patrols in the North Sea, believing that Ehrlich must pass through the patrols in his attempt to reach Kiel, and flies to England as the Ergenstrasse departs for Germany.
For political reasons, German radio broadcasts a message through Lord Haw-Haw that discloses the position of the Ergenstrasse as it passes Norway, thus giving up the ship and crew to the Royal Navy and to the waiting Napier, now commanding a corvette.
Napier tracks down Ehrlich’s ship and sinks it in the North Sea; only Ehrlich, Elsa, and an unwilling Kirchner remain aboard for the short, one-sided battle. It is left unclear whether they die, but the other crewmen hand over the ship’s log to Napier, proving that Kirchner committed the murders alone.

Lana Turner plays Elsa Keller, a German spy in Australia.
The song that Lana sings is “Steh’ Ich im Finster Mitternacht”, which is also known as “Treue Liebe”.
The German song had English lyrics written specifically for the film.

“The Sea Chase” offered a storm at sea, a shark attack, a suicide and a near mutiny. John Farrow, a practised hand with this sort of material, directed and as an adventure film, the Sea Chase is good entertainment. For some critics, the presence of its stars introduced a note of unreality in an otherwise fairly valid portrait of one man’s allegiance to his country. One reviewer called it: “the oddest casting of the year. John Wayne, that all-American hunk of man, is a German sea captain and Lana Turner, that all-American hunk of woman, is a German secret agent! Of course,” she continued, “once you accept this, you settle back. your tongue anchored firmly in your cheek, to enjoy a suspenseful drama which doesn’t neglect a fire-meets-romance between John and Lana. Neither one bothers with a German accent. Both stars are content to be themselves and that’s just dandy with moviegoers.”

Lana liked this movie, because making it took her to Hawai in the fall of 1954. On Lana’s request Del Armstrong, her makeup artist, was brought over, after she agreed to pay part of his salary. They did splurge on one beautiful champagene-colored dress by costume designer Moss Mabry. The rest of the clothes, jewelry and furs she wears, were from her own wardrobe. 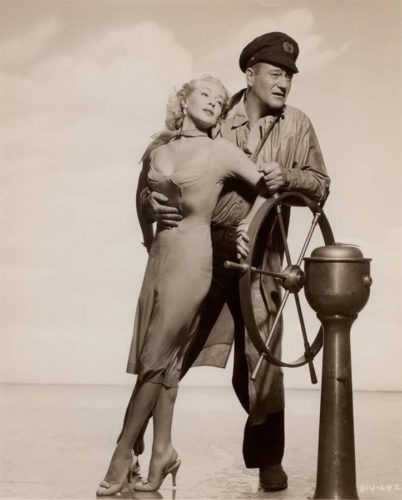 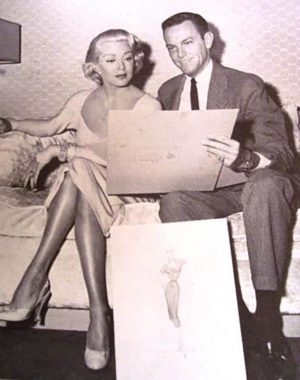 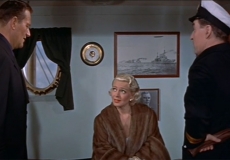 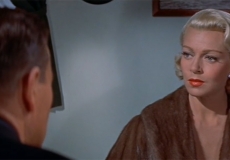 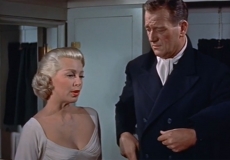 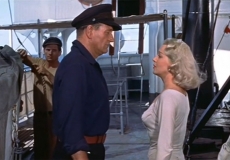 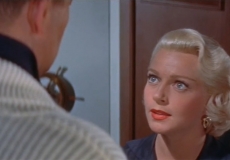 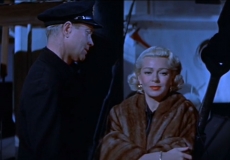 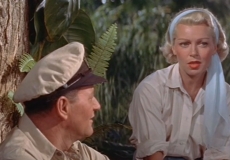 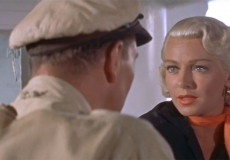 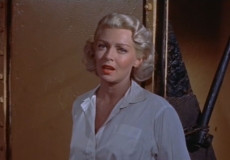 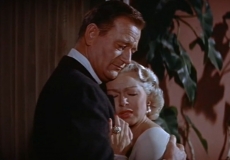 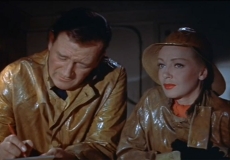 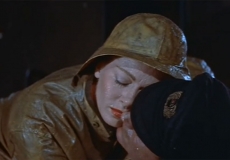 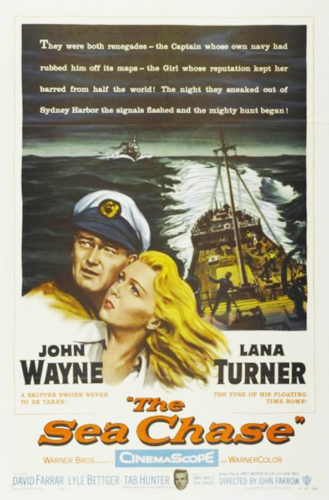 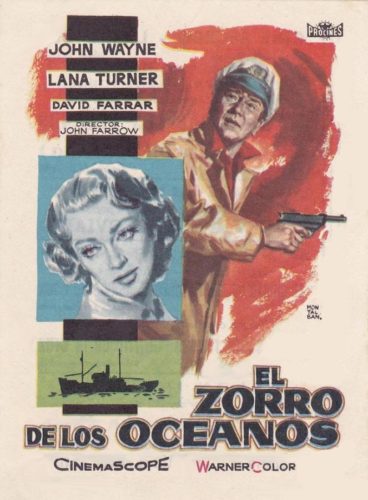