“The Three Musketeers” is a Technicolor adventure film adaptation of the classic novel The Three Musketeers by Alexandre Dumas, père, written by Robert Ardrey, which starred Gene Kelly and Lana Turner.
The film is today best remembered by many movie fans for its outstanding fight choreography in the combat sequences, which has been used as inspiration for movie fight scenes ever since.

D’Artagnan (Gene Kelly), an inexperienced Gascon youth, travels to Paris to join the elite King’s Musketeers. On his way, he encounters a mysterious lady at a roadside inn. When he picks a fight with one of her escorts, she becomes suspicious and has him knocked unconscious. His letter of introduction from his father to de Treville (Reginald Owen), the commander of the Musketeers, is burned. When he awakens, he continues on to the city.

In Paris, he nevertheless presents himself to de Treville, who recognizes d’Artagnan’s description of one of his assailants and, saying “A man is sometimes known by the enemies he makes,” makes him a cadet. The young Gascon spots the very man and in his haste to confront him, annoys three of the most skillful Musketeers: Athos (Van Heflin), Porthos (Gig Young) and Aramis (Robert Coote). Each challenges him to a duel. At the appointed place, upon learning they are all there to duel the same man the master swordsmen are amused by the newcomer’s audacity. Before they can begin, however, they are interrupted by Richelieu’s guards, who try to arrest the Musketeers. Outraged that the three are outnumbered, d’Artagnan joins them in dispatching their foes, displaying his superb swordsmanship in the process. As a result, he is welcomed into their ranks.

Later, d’Artagnan rescues (and falls in love with) Constance Bonacieux (June Allyson), a confidante of Queen Anne (Angela Lansbury). The queen had been given a matched set of twelve diamond studs by her husband, King Louis XIII (Frank Morgan). Foolishly, she gives them to her lover, the Duke of Buckingham (John Sutton), who is also the Prime Minister of Great Britain. Knowing of the queen’s indiscretion, Richelieu (Vincent Price) sees a way to persuade the King to go to war with Britain. Richelieu arranges a ball and suggests to Louis that he have the Queen wear the diamonds.

D’Artagnan and his three friends volunteer to travel to Britain to retrieve the jewels, but along the way, they are ambushed by Richelieu’s men. One by one, the Musketeers are forced to stay behind to hold off their pursuers. Finally, only d’Artagnan and his servant Planchet (Keenan Wynn) are left to reach the Duke. However, Richelieu had already sent the beautiful Milady, Countess de Winter (Lana Turner) to work her wiles on His Grace and steal two of the studs. Fortunately, the Duke’s jeweler is able to make replacements quickly and d’Artagnan races back to France. He arrives just in time to save the Queen from disgrace.

Admiring d’Artagnan’s resourcefulness, Richelieu has Constance abducted in an attempt to enlist him in his service. He also assigns de Winter to help persuade the young man. D’Artagnan tries to learn where Constance is being held from Milady, but begins to fall under her spell instead. When Athos discovers that the Countess de Winter is actually his treacherous wife, he tries to warn d’Artagnan, but is not believed. Then d’Artagnan finds out that Athos was telling the truth: He sees a brand on Milady’s shoulder, the mark of a common criminal, just where Athos had told him he would.

Fighting breaks out between Britain and France. The Queen succeeds in freeing Constance and sends her to Buckingham for safety. When the war goes against him, Richelieu gives de Winter a carte blanche and sends her to Britain to assassinate his foe. The Musketeers learn of the plot and send Planchet to warn the Duke. Athos confronts Milady and recovers the carte blanche as proof of Richelieu’s treachery. De Winter is imprisoned by the Duke and placed in the custody of Constance, but when the latter lets her guard down de Winter kills first her, then Buckingham. Athos and d’Artagnan arrive too late to save them.

D’Artagnan and Athos return to France with a self-imposed mission: find the Countess de Winter and give her justice for the murders of the Duke of Buckingham and Constance. They lose track of her on the road to Lille and return to Paris. Captain de Treville informs them that de Winter has not been seen in the city, and warns the Musketeers that she is under Richelieu’s protection; if they continue their vendetta, if they are not killed they will have to flee to Spain as wanted men. They elect to proceed after Aramis recalls a conversation between Milady and Richelieu concerning the granting of a title and an estate near Lille.

Caught once again by the Musketeers at that estate, the ancestral home of Athos, she begs for mercy but finds none, even though her husband still loves her despite her many crimes. Seeing this, she calms herself and walks with dignity to her execution. The Musketeers are ambushed by Richelieu’s men, captured, and returned to the Royal Court for judgment.

As Richelieu is about to have them sentenced to death by the king, d’Artagnan produces the carte blanche. Richelieu is compelled to recommend to King Louis that he grant Aramis’s wish to enter a monastery; Porthos, an introduction to a rich widow; Athos, the restoration of his title and lands; and d’Artagnan, a commission as a Musketeer and a mission to England, for “the English lead too dull a life.” The four, dismissed by the King, stride from the throne room in triumph.

Lana Turner, as Milady, was dressed to the nines and heavily bejeweled for her beheading sequence.

“The Three Musketeers” marked Lana’s long overdue starring debut in a Technicolor feature.
Apart from the superb camera work accorded Lana, her appearance as Milady is noteworthy for another reason: it’s the only scarlet woman she’s ever played who had absolutely no redeeming graces. Turner’s femme fateles were always allowed their big regeneration scene – but not Milady. Uncharacteristic of MGM’s protective measures towards its players in those days, Milady was one of the few deep-dyed villainesses ever to escape the whitewashing treatement ordained by the studio to gain audience sympathy for a valuable star playing a “heavy.”  Milady, however, reamined Evil Incarnate from first reel to last and the decision to sustain her satanic nature throughout was a great asset to the film and true to the spirit of the original Dumas delineation.

Walter Plunkett’s costumes for Lana were enticing in his palette of greens, violet, coral and turquoise, with colored jewel adornments to de-emphasize the low necklines. And Del Armstrong, her makeup man, and Lana came up with some “beauty marks” in the shape of hearts, circles and moons and tried them out on different locations of her face. 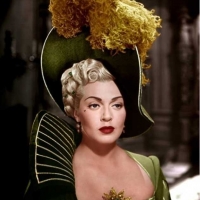 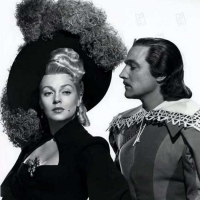 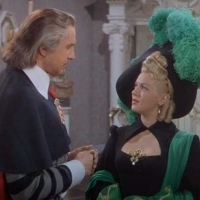 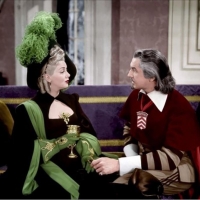 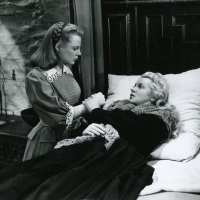 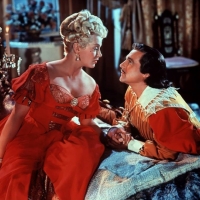 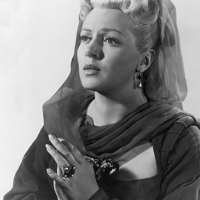 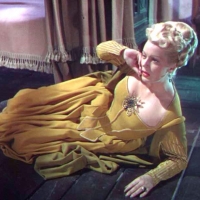 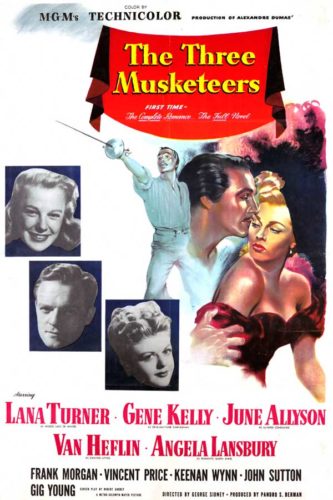 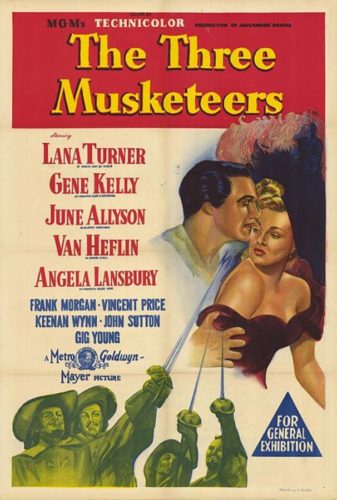