“The Adventures of Marco Polo” is a 1938 drama-adventure genre film, and one of the most elaborate and costly of Samuel Goldwyn’s productions. Nicolo Polo shows treasures from China and sends his son Marco Polo (Gary Cooper) there with his assistant (and comic relief) Binguccio (Ernest Truex).
They sail from Venice, are shipwrecked, and cross the desert of Persia and the mountains of Tibet to China, to seek out Peking and the palace of China’s ruler, Kublai Khan (George Barbier). The philosopher/fireworks-maker Chen Tsu (H. B. Warner) is the first friend they make in the city, and invites them into his home for a meal of spaghetti.
Children explode a fire-cracker, and Marco thinks it could be a weapon. Meanwhile, at the Palace, Ahmed (Basil Rathbone), the Emperor’s adviser, harboring dubious ambitions of his own, convinces Emperor Kublai Khan that his army of a million men can conquer Japan.
Kublai Khan promises Princess Kukachin (Sigrid Gurie) to the King of Persia. Marco, arriving at the palace, sees Kukachin praying for a handsome husband.
Marco is granted an audience with the emperor at the same time as a group of ladies-in-waiting arrive; Kublai Khan lets Marco test the maidens to find out which are the most worthy. Marco tests them all with a question (“How many teeth does a snapping turtle have?”), and he sends off the ones who had incorrectly guessed the answer, as well as those who had told him the correct answer (none), retaining those saying they did not know.
His reasoning behind this is that they are the perfect ladies-in-waiting, not overly intelligent, and honest.
Kublai agrees and Marco immediately becomes a favored guest.
Ahmed shows Marco his private tower with vultures and executes a spy via a trapdoor into a lion pit.
Kukachin tells Marco that she is going to marry the King of Persia, but, having fallen in love with her, he shows her what a kiss is.
A guard tells Ahmed, who vows to keep Marco out of the way. Ahmed then advises Kublai Khan to send Marco into the desert to spy on suspected rebels. Kukachin warns Marco of the deceiving Ahmed.

Lana Turner plays Nazama’s maid, a Eurasian handmaiden who had caught the eye of a warrior chief, played by Alan Hale.
Lana enjoyed the glamour and scope of the film, but hated the costumes and her makeup. 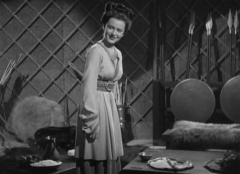 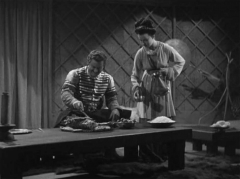 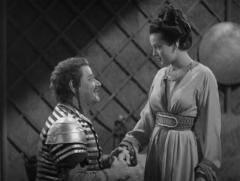 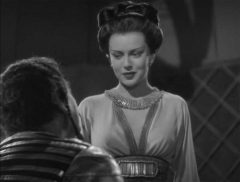 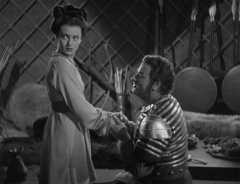 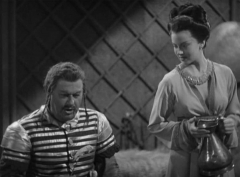 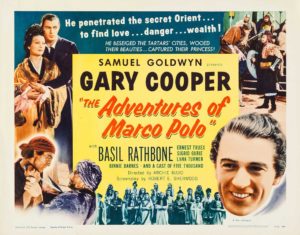